What is a Cochlear Implant?

The cochlear implant consists of two main components. The first is an external sound "receiver" rather like a hearing aid. This "picks up" sound and passes it through a short cable to a small antenna/transmitter.

The second component is surgically implanted under the skin behind the ear. A small circular "antenna" picks up the signal from the transmitter and passes this signal through a series of 22 electrodes into the "cochlea" (the hearing organ) of the inner ear.

Who is a candidate for a cochlear implant?

Children and babies who have severe to profound hearing loss, who demonstrate limited ability to benefit from the most powerful hearing aids. In babies, the hearing loss is diagnosed by a combination of "auditory brainstem response" (ABR) testing, Otoacoustic emission testing (which assesses tiny sounds which are actually made by the ear) and also by behavioural testing (looking at the child's response to sound,  without and with wearing hearing aids).

Responses to hearing aid fitting are also assessed typically over several months, and determined by parents, audiologists and hearing therapists.In children who have lost hearing as a result of meningitis, (particularly pneumococcal), we do not have the luxury of such an assessment period, as the cochlea typically "closes up" with new bone in the first few weeks to months after meningitis, rendering the cochlea extremely difficult to implant beyond 12 weeks after a meningitis infection.

Adults who have severe to profound hearing loss, and show limited benefit from the most powerful hearing aids. The ability to understand speech clearly while wearing the hearing aids is an important assessment tool and helps guide candidacy. We compare the abilities of an adult candidate using hearing aids with someone in similar circumstances using a cochlear implant. Those who are able to understand less than 50% of words correctly, whilst wearing the aids, may be candidates, as this ability would be expected to be superior with an implant. Some adults who have a progressive hearing loss, but who perform slightly better than this on speech testing may also be candidates to benefit from a cochlear implant. Those with asymmetric hearing loss, but with only mild or moderate hearing loss in one ear may be considered candidates in some cases also.

When should a cochlear implant be fitted?

The simple answer is "as early as possible."

In babies who are diagnosed through screening programmes, this may mean the benefits of an implant are obtainable by six months of age.

In young children who have never heard before, the brain gradually loses its ability to utilise sound. By the age of 4-5 years in a child with profound hearing loss, this ability has diminished so much that even a cochlear implant fitted after this stage, will be of minimal benefit.

Children and adults who have a progressive hearing loss and who have already developed oral language may all potentially benefit from a cochlear implant.

The duration of profound deafness has a significant impact on the potential benefit of a cochlear implant. In an adult or child,an ear which no longer is able to benefit from amplification of a hearing aid would be expected to slowly lose its nerve supply over 2 decades or so. Therefore, adults with a long duration of deafness and no hearing aid use would be expected not to be able to hear as well with an implant, compared to someeone who receives an implant after a shorter duration of deafness. Again, the message is, "as early as possible" once you are determined to be a candidate for one.

How is the assessment for a cochlear implant done?

The assessment usually starts with referral from an audiologist or hearing therapist or advisor on deaf children to the public or the private cochlear implant programme. Assessment is performed by myself and cochlear implant specialist audiologists and hearing therapists. Information from those making the referral is utilised, in addition to further testing of the hearing, and MRI (magnetic resonance imaging) and/or CT (computerised tomography) scanning of the ears and head.

Children (New Zealand Residents): The assessments are discussed as a group with the implant candidate (or parents),myself, the cochlear implant audiologist and the hearing therapist. A recommendation may then be made for public funding of the implant, to the Northern Cochlear Implasnt Trust. This decision is made by a committee of cochlear implant experts in surgery, audiology and hearing therapy, and would include those who are directly responsible for the hearing care of the candidate. In New Zealand, public funding is expected to cover most cochlear implant costs for life.At present there are long waiting lists for cochlear implantation for adults.

Private funding of cochlear implants and cochlear implant surgery is also possible. In this situation, there is no requirement for a review by the funding committee, and the decision is made by yourself with advice and recommendations from your cochlear implant audiologist at "Dilworth Hearing," your habilitationist (if you have one) and myself.

I perform this surgery at Gillies Hospital, 160 Gillies Ave, Epsom. This is where all Cochlear Implant operations take place in Auckland (see the map on my website).This procedure involves the insertion of the receiver with electrode array. It is regarded as a fairly routine operation but can take up to several hours in the operating room. It is performed under general anaesthesia (asleep).A small amount of hair is shaved from behind the ear. An incision (cut) is made behind the ear and a pocket created to house the implant. Some air cells in the mastoid bone, which is part of the ear, are removed to enable access to the inner ear. The electrode array (with 22 electrodes along it) is inserted through the mastoid, over the top of the facial nerve and into the "round window" of the inner ear. The device is secured and the incision is then closed using buried dissolving stitches and skin glue. A head bandage is worn overnight. In some cases, it may be possible to return home at the end of the day, and for some, an overnight stay is required.We prescribe paracetamol and an anti inflammatory (suh as brufen) to manage discomfort for 5-7 days post operatively.

What are the risks of a cochlear implant?

This occurs two weeks post operatively. The first appointment is called "switch on", where each individual electrode is adjusted to maximise the ability to hear. in the subsequent weeks and months, the stimulation of each electrode is adjusted. Usually, minimal adjustment is required after a year of use. Programming is performed for children at Hearing House in Auckland and at outreach clinics in Hamilton, Rotorua and Tauranga . For adults this is performed at the University of Auckland, East Tamaki Cochlear Implant clinic, or at Dilworth Hearing.

What may I reasonably expect from a cochlear implant?

Adults may expect significant benefits of improved clarity of speech perception. The hearing is stabilised and usually remains stable. Typically, self confidence improves vastly, as does the ability to function in many day to day tasks, as does the ability to work. Many may hear enough to use a standard telephone.For most adults who have the implant, this is a life changing event.Children who receive the implant very early in life, before the development of speech, can be expected in most cases to hear sufficiently develop normal speech clarity, and to develop sufficient language to enable their attendance at a normal local school. Every child is different however, and specific advice about this would be needed from your "cochlear implant team."

Now, adults and children may swim with their implants, using a special implant cover. 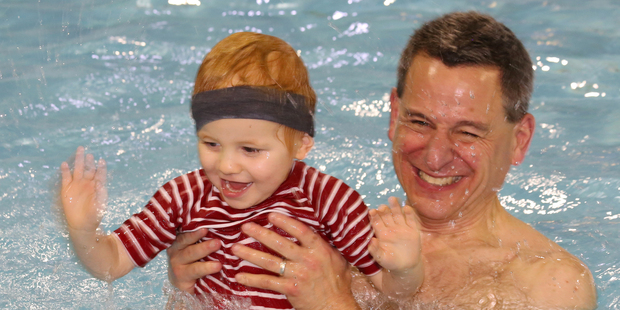 Henry, wearing his cochlear implant (and a headband) swimming with his Dad, Scott  (used with permission)

Watch Danielle test out her new cochlear implant under water:

We recommend bilateral cochlear implantation where possible. There is now good evidence from overseas research and from our own personal experience that two cochlear implants are better than one. Children  perform better with bilateral implants when these are implanted at an early age. Ideally the implants should be inserted simultaneously. Advantages of two implants include better perception in noise, the ability to localise sound direction and a greater feeling of being "connected" with or centred in the sound world. It is also very nice to have a back up if batteries unexpectedly go flat in one of the implants.

If you need further information or advice please do not hesitate to contact me for an appointment.